3. Development Proposals for the JAAP

This chapter provides an overview of the policy approach to the development of the Airport and the new employment land within the JAAP area. A detailed commentary that supports and provides the context for development is provided with each policy in the next chapter.

1 – The future development and role of London Southend Airport

The Airport Masterplan 2005, prepared by London Southend Airport, sets out a vision for how the Airport could grow into a regional airport based on using its current runway (length 1,610 metres), but with the provision of new passenger infrastructure, including a new railway station and passenger terminal facilities. The railway is fundamental to increasing the attractiveness of the Airport to potential airline operators as it increases the size of the passenger catchment to include core markets within London (by reducing the travel time to the airport). With this investment, the Airport Masterplan concluded that there is the potential to increase passenger movements at the Airport to around 1 million passengers by 2012 and up to 2 million passengers by 2030.

An increase in the operational length of the runway to 1,799 metres, after planning permission was given, has had an important impact in terms of the capacity potential of the airport and its resultant attractiveness to airline operators, notably EasyJet. Lengthening the runway across Eastwoodbury Lane enables aircraft with a seating capacity of 100-150 to be operated fully laden out of the airport for business and leisure passenger uses, making the airport a more attractive fixed base for a wider range of operators.

Lengthening the runway is not simply about allowing larger Aircraft to use the Airport. The modern generation of medium sized passenger aeroplanes[2] that may be accommodated as a result of the runway extension are quieter and more fuel efficient – the end result is that the environmental impact of enabling the operation and efficient use of larger aircraft is lessened on the surrounding area.

It is expected that, the extension to the runway will allow the airport to grow faster to a maximum capped passenger capacity of two million passengers per annum (mppa). Evidence suggests that the likelihood of reaching the passenger forecasts is strong, which in turn improves the potential for investment in the other assets such as the extended passenger terminal, and supporting facilities such as a new hotel. In economic terms, it is considered that the airport will act as a driver for the local economy, providing direct employment as well as enhanced opportunities for wider aviation related and business employment.

The expansion of the Airport will also include new opportunities for directly related maintenance and overhaul businesses to develop on the extension to the northern MRO area.

2 – The future of the JAAP as an employment area

It is considered that high scale employment growth within the area will make a significant contribution towards delivering new employment opportunities for both JAAP authorities. The JAAP area must take a pro-active role in encouraging employment development for both aviation-related growth (associated with airport growth) and targeting the delivery of accommodation for high-tech industries and offices (specifically in planning use classes B1 and B2). Given the current constraints of the local property market, this will provide the area with the greatest chance of creating employment capacity and attracting investor demand. The market analysis[3], while accepting the current market limitations resulting from the credit crunch and recession, recognises that the area will be attractive to companies and investors over the long-term and that new development within the JAAP will be a key economic driver for the area and will help to provide an exceptional offer that is currently lacking in south-east Essex.

A high growth approach will require sufficient employment land to be allocated to allow for the potential of the area to be fully realised. The plan allocates land to accommodate up to 109,000 square metres of additional floorspace, with 99,000 square metres to be located in the new Saxon Business Park and the balance on a smaller business park at Nestuda Way, which together will accommodate up to 5,450 additional jobs in the area over the planning period to 2031. It is also anticipated that 15,000 square metres will become available for redevelopment within the existing Aviation Way Industrial Estate. All together these sites could deliver 6,200 additional jobs (excluding direct airport related employment).

More activity from the Airport and the allocation of new business parks will inevitably result in some environmental impacts that must be managed considerately and appropriately, and the Plan includes a mix of physical measures and a policy approach which, when combined, will help manage and maintain a sustainable future for the area. It is accepted that the environmental impacts (noise and air quality, in particular) will need to be carefully monitored as a result of the increased number of aircraft and vehicle movements in the area.

To address these concerns the Plan's policies and proposals consider the location for new development in combination with opportunities for new public open space to enhance the environment, as well as proposing detailed controls on the operation of the Airport to ensure quality of life is maintained for residents. In addition sustainable transport measures will be implemented to minimise traffic impacts and congestion. Furthermore, the JAAP has been subject to independent Sustainability Appraisal and Habitats Regulation Assessment to ensure that environmental and social issues are considered and addressed, where necessary.

The approach to transport is intended to ensure that development within the JAAP is sustainable, and that there is integration with, and appropriate financial support for, proposals to improve the functioning of both the local and wider highway network (including improvements in Rochford District and the A127 junctions at The Bell, Tesco and Kent Elms Corner) as well as provide internal solutions to movement and accessibility. The transport requirements for the JAAP have taken the following issues into account:

The development proposals for each part of the JAAP are summarised below and illustrated in the accompanying diagram. These proposals are set out in detail in the next chapter of the Plan and on the Proposals Map.

Proposal - The site is located close to one proposed option for new access to Saxon Business Park from Cherry Orchard Way as set out in Policy E3. The allocation is Class B1. There are no plans to remove the residential properties to facilitate development. The area is shown as 1 on the Proposals Map.

Proposal-Shown as 3 on the Proposals Map, this land is allocated for Class B1 development as set out in Policy E3.

Proposal – The site is allocated for leisure uses and open space, with the Westcliff Rugby Club being relocated here with provision of a facility to at least its current standard as shown on the Proposals Map and set out in Policy ENV2. The land remains in the Green Belt.

Proposal – The land is set aside as a public open space to link to area ii(b) and to provide a green lung for surrounding development as shown on the Proposals Map and set out in Policy ENV2. The land remains in the Green Belt.

Proposal – This land, shown as Area 2 on the Proposals Map, is allocated for Class B1 development as set out in Policy E3.

Proposal – This land will be incorporated into a northside extension of the Maintenance, Repair and Overhaul land within the Airport boundary as shown on the Proposals Map and set out in Policy MRO2.

Proposal – The aim is to see the existing industrial estate significantly improved in terms of the quality of its public realm and to promote, through policy, opportunities for redevelopment, which will contribute to additional jobs in the JAAP area, as set out in Policy E2.

Proposal – This area of land is to be utilised to create a new public open space to provide amenity for neighbouring residents as set out in Policy ENV3.

Proposal - Planning consent was granted for the provision of a new passenger terminal and railway station (both completed) and this area is identified on the Proposals Map (terminal operations hub) for that purpose, recognising there is likely to be a requirement for expansion of the terminal building and the provision of more car parking facilities, as set out in Policy TF1.

Proposal - This area is identified on the Proposals Map as the Southern MRO and Airport Development Zone as per Policies MRO3 and ADZ1.

Proposal - This strip of land is to be retained within the Metropolitan Green Belt to provide a green buffer between the airport and the residential properties to the east, as shown on the Proposals Map and set out in Policy ENV6.

Proposal - This area of land accommodates the extension to the existing runway, and the new link road between Nestuda Way and Eastwoodbury Lane. The new link road has been constructed so as to avoid the Public Safety Zone associated with the extended runway. See Policy T1.

Proposal – An area of land to the south of the Public Safety Zone is allocated for B1 development, as shown on the Proposals Map and set out in Policy E7 (Nestuda Business Park). 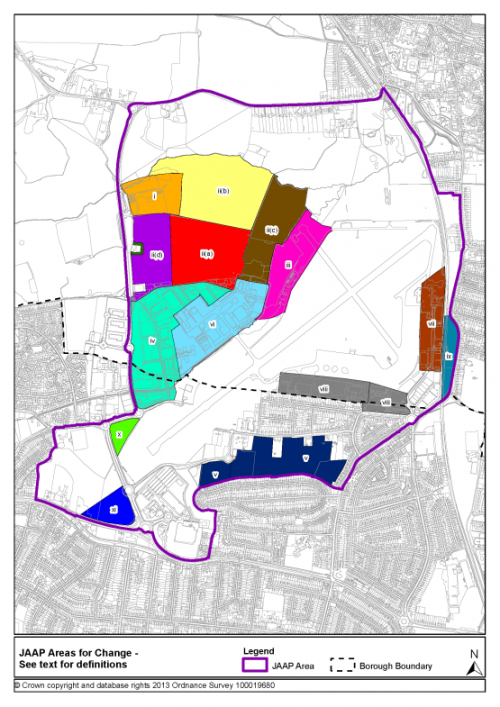