0.1 In 2001 the Government recognised the importance of the Southend area to the Thames Gateway by including the entire Borough within its extended boundaries. The Thames Gateway is the Government's national and regional priority for regeneration and growth as set out in the current Regional Spatial Strategy (Regional Planning Guidance for the South East (RPG 9, 2001)). These provisions are reinforced in the Government's Sustainable Communities Plan of 2003[1].

0.2 The Thames Gateway extends from East London to Southend on the north bank of the River Thames and Sheerness in Kent to the south of the River. That part of Thames Gateway located in South Essex lies within the East of England region (see Map 1).

0.3 Significant progress has been made in working towards the key objective for the Essex Thames Gateway (ETG)[2] sub-region of achieving regeneration through jobs-led growth, higher levels of economic performance and employment, and a more sustainable balance of local jobs and workers. Complementary Zones of Change[3] have been identified as the catalyst for delivery of the vision, Southend being identified as the 'cultural and intellectual hub and a higher education centre of excellence.'

Sustainable Development: development which meets our current needs without wasting natural resources or spoiling the environment for future generations.

(Our Common Future: The World Commission on the Environment and Development - Bruntland Report 1987)

0.4 Progress has included the establishment of key delivery mechanisms, notably the Urban Regeneration Company for Southend - "Renaissance Southend Limited" and the Thames Gateway South Essex Partnership together with its related Transport Delivery Board, and the completion of a number of major public sector led projects including: 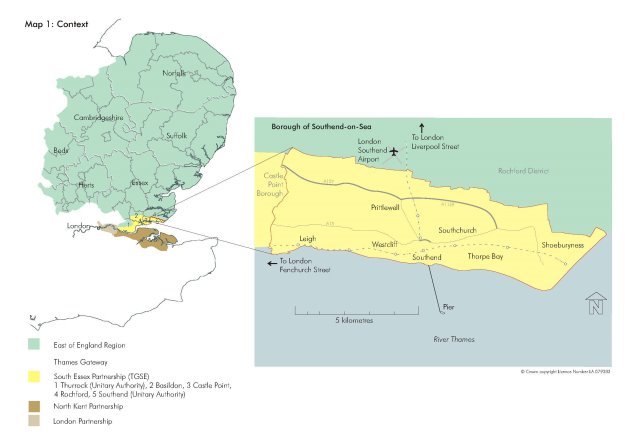 0.5 The Urban Regeneration Company is one of a number of such companies established in key towns and cities in the Country to promote and deliver regeneration and growth as part of the Government's Sustainable Communities Plan Agenda.

Urban Renaissance: action that secures significant improvement to the vitality and environment of urban areas so that they are more attractive places in which to live, work, shop and spend time.

0.6 These changes have brought benefits to the locality and the region and represent a first step in working towards addressing a number of acute economic, housing and transportation problems that have historically affected Southend namely:

0.7 Private sector investment will now represent the next phase of regeneration and growth in the town. However, this will not be achieved without continued Government support in policy and financial terms and the establishment of a clear up-to-date planning framework to guide potential developers and to maximise the regeneration opportunities offered by the town.

0.8 The challenge facing Southend on Sea Borough Council (hereafter referred to as 'the Council') over the next two decades will be to maintain the momentum of change whilst ensuring that it is achieved in a planned and balanced manner and respects the local environment to deliver jobs led sustainable regeneration and growth. Key to this will be the delivery of the infrastructure necessary to support the provision of new jobs and housing, particularly transport infrastructure.

0.9 Transport studies[4] have clearly illustrated that the scale of the transportation problems in TGSE is such that demand management alone will not solve the problems and there is no escaping the need for significant investment in transport infrastructure and services to deliver a 'step change' in provision.

0.10 Without improvements to the infrastructure the Government's objectives for regeneration and growth as set out in its Sustainable Communities Plan will not be met.

*Note: Resident Population - ONS population estimates remain significantly out of step with population counts based on other sources eg residents registered with GP's was 175,240 in 2002.

0.11 The preparation of this Core Strategy Development Plan Document (DPD) represents the first stage in preparing such a comprehensive land use planning framework for the Borough of Southend on Sea as a whole (hereafter referred to as 'Southend'). Once adopted it will replace elements of the current Borough Local Plan that was adopted in 1994.

0.12 This Core Strategy does not include a review of those policies of the adopted Essex and Southend on Sea Waste Local Plan that refer to Southend on Sea. The latter plan covers the period to 2010. The Borough Council will prepare a Waste Core Strategy to review that plan for the post 2010 period. It will be amplified in the Council's Criteria Based Policies and Site Allocations DPD. In the meantime it is considered that the relevant policies of the adopted Waste Local Plan remain appropriate to the needs of the Borough.

0.13 The Core Strategy is required to be prepared in accordance with national planning policy guidance[5] and the regional spatial strategy (RSS), currently Regional Planning Guidance for the South East (RPG 9). A revised RSS is now at an advanced stage of preparation, and the emerging 'East of England Plan' (Regional Spatial Strategy for the East of England) will, once adopted, replace RPG 9. The adopted and emerging regional spatial strategies fully endorse the objectives of Essex Thames Gateway and set out strategic policies for the regeneration of the area, including specific targets for additional jobs and dwellings in Southend.

0.14 The Core Strategy also needs to take into account, and inform the preparation/revision of, other related plans and documents to ensure an integrated approach to regeneration. These include the Southend on Sea Local Transport Plan and Southend's Community Plan (see Diagram 1).

0.15 The Core Strategy provides the vision, objectives and broad strategy for the spatial development of Southend. This includes the distribution of a 10-year housing supply; and sets out key policies against which all planning applications will be assessed, including the Council's core policies on minerals and the protection and enhancement of the natural and historic environment (including conservation areas).

0.16 Following public consultation in accordance with statutory procedures and an Examination of the Plans policies and proposals, including a hearing before an independent inspector, the Core Strategy was adopted by the Borough Council on 13th December 2007. 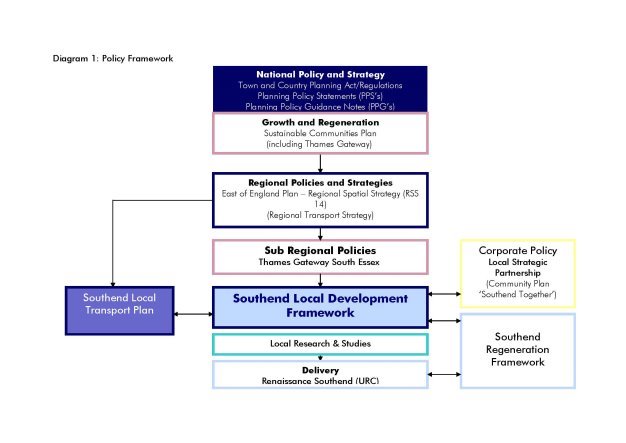 0.17 Sustainability Appraisal Report and Appropriate Assessment (prepared by Baker Associates on behalf of the Council) accompanies the Core Strategy,detailing the social, economic and environmental impact of the proposals.

0.18 Further Development Plan Documents (DPD's) and Supplementary Planning Documents (SPD's) will be prepared in due course within the framework of the Core Strategy to provide for more detailed site-specific policies and development guidance. These plans will be prepared in accordance with the timetable for plan production as set out in the Council's Local Development Scheme (LDS). Once completed the documents will make up a comprehensive Local Development Framework (LDF) for Southend that will replace the current Borough Local Plan in its entirety. Progress in implementing the provisions of these plans (collectively known as local development documents) will be monitored by means of an Annual Monitoring Report (AMR) and changes will be made to appropriate plans if deemed necessary.

0.19 Table 2 illustrates the existing and emerging replacement planning policy framework whilst Diagram 2 shows the documents that will comprise the Southend Local Development Framework.

0.20 The Core Strategy has been informed by a number of supporting documents commissioned by the Council, 'Renaissance Southend' or the Thames Gateway South Essex Partnership. These will in turn inform the preparation of further DPD's and SPD's. The supporting documents are as follows: 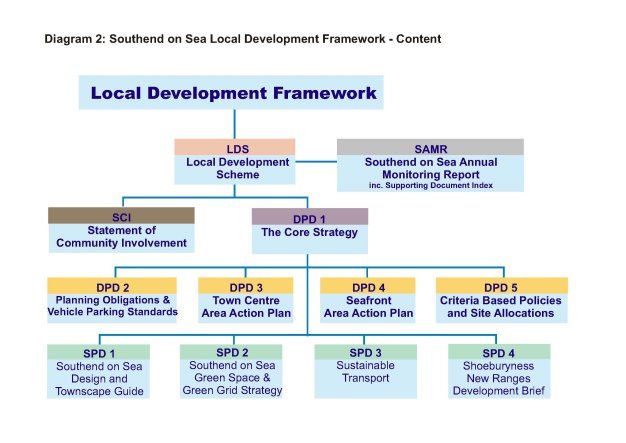 [1] Sustainable Communities: Building for the Future, Office of the Deputy Prime Minister, February 2003

[2] The Essex Thames Gateway (ETG) broadly encompasses the areas south of the A13 in Thurrock and of the A127 in Basildon, together with the whole of the Boroughs of Castle Point and Southend and London Southend Airport within Rochford District.

[3] The Thames Gateway South Essex Partnership (TGSE) has designated three districts as 'Zones of Change' as the catalyst for the delivery of the vision for a regenerated and sustainable TGSE. The 3 Zones are Thurrock, Basildon and Southend. These are supported by identified 'Zones of Influence', namely Rochford and Castle Point.